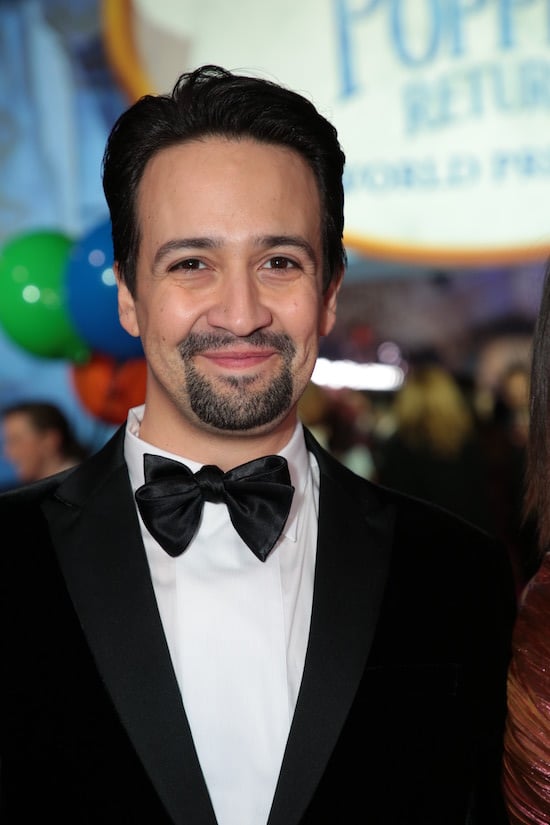 I have a short list of people on my dream interview list and Lin-Manuel Miranda is one of them. So, you can imagine how excited I was to actually have the chance last month to meet and interview him while I was in LA for the Mary Poppins Returns red carpet premiere. 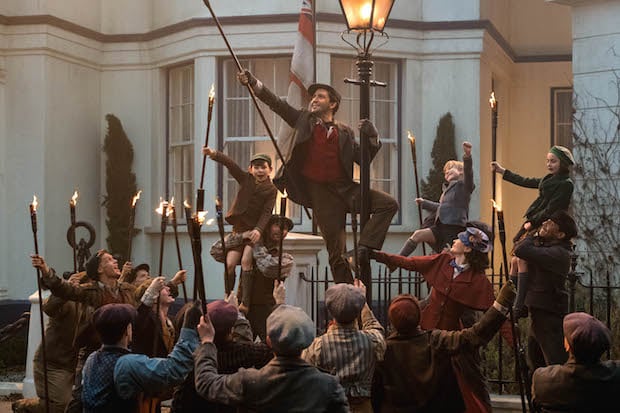 I'm a HUGE Lin-Manuel fan and the Broadway musical Hamilton has a lot to do with it – just in case you don't know, he created and starred in it, as well as his musical, In the Heights. And Mary Poppins Returns isn't Lin's first connection with Disney. He also co-wrote the songs for the Moana soundtrack. He is just oozing talent! 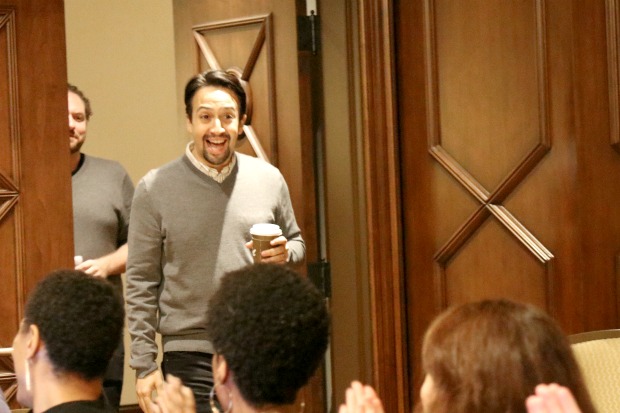 Seeing Lin-Manuel Miranda walk into our meeting room was the highlight of my month (dare I say year?), so it was extra special to hear him say “You're the highlight of my day. Hello!” Lin was suffering a bit from laryngitis on the day of the Mary Poppins Returns World Premiere (the same day as our interview) so I was relieved to see that he was still up to the task of speaking about his role in this wonderful movie. 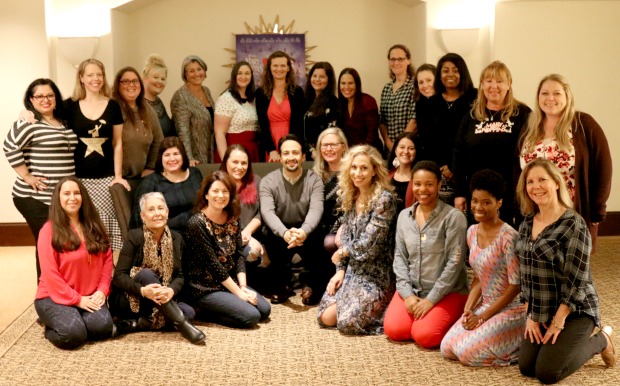 Big thanks to my friend Enza at EnzasBargains.com for giving me her seat next to Lin!
(Photo: Jana Seitzer)

On Performing Someone Else's Work:

Lin is best known for performing his own musical works, so we wondered how it would be for him to perform someone else's creation. He referred to doing so as, “the fruit of the harvest“. He went on to explain, “I started writing In The Heights because I very quickly realized at age eighteen that no one was gonna write my dream musical.”

“I did not have the ballet training to play Bernardo in West Side Story or Paul in A Chorus Line. And if you're a Puerto Rican dude, that's all you get in the cannon. So In The Heights really was the beginning of creating my own opportunities. Hamilton is an extension of that.”

“Then to have Rob Marshall call you and tell you ‘it's Emily Blunt as Mary Poppins and you're the only other person we have in mind and we're going to build from there', it felt like the fruit of the harvest. The harvest I began when I was eighteen years old.” 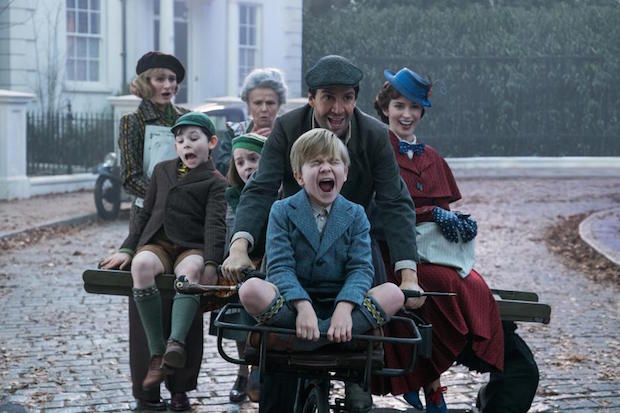 The Experience of Performing Musical Theater vs. a Movie Musical:

Lin described being in a movie musical as, “You finish the eight minute dance number and you wait a year and a half for applause. But honestly, you're trying to tell the truth on stage and you're trying to tell the truth in film. The difference is the energy source. Doing eight shows a week is like yoga. You're gonna hit the same positions every night, but you're gonna hit 'em differently depending on your energy, the audience, your fellow performers. And you have two the next day.”

“The energy source in making a film, especially a film like this, is that today you're dancing with penguins. Tomorrow you're singing with Meryl Streep. Friday you're shutting down Buckingham Palace with 800 bikers. And you're not coming back. We're not going back to the penguins next week. You don't get two shows a day with Meryl Streep tomorrow. So the adrenaline source becomes ‘this is a once-in-a-lifetime moment and you have to be completely present'. And so it just shifts from the audience to the sheer one-of-a-kindness of it.”

On the Fantastic ‘Trip A Little Light Fantastic' Dance Sequence:

One of my personal favorite scenes in Mary Poppins Returns is ‘Trip A Little Light Fantastic'. Lin explained to us the hours and hours of work that went into pulling off that spectacle. Lin explained, “Rob [Marshall] ran it as an eight minute dance sequence. There were three minutes of the song that are getting to that abandoned playground and that was on location throughout London. And now we're here, and now we're in the sewer, and now we're here. And then there's that sequence. And that sequence – it was run as if it was a Broadway musical number. From jumping on the lamppost to the flaming sticks balancing on my foot, that was all run of-a-piece with hundreds of cameras around. I'm very proud of that. I've never danced like that in my life. I was very proud of that because it was a lot of hard work to get there.” 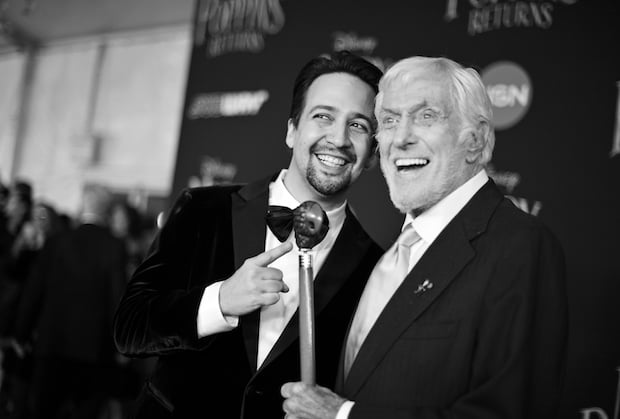 “I realized going in,” said Lin, “that no matter what I did, my accent would be scrutinized for the rest of my career – if Dick Van Dyke is any indication. But the fun of that is that music is sort of my catalyst for everything. I had an amazing dialect coach named Sandra Butterworth, which is a very Poppinsian name in and of itself, and she became my closest friend and ally on set, whispering in my ear between takes.” 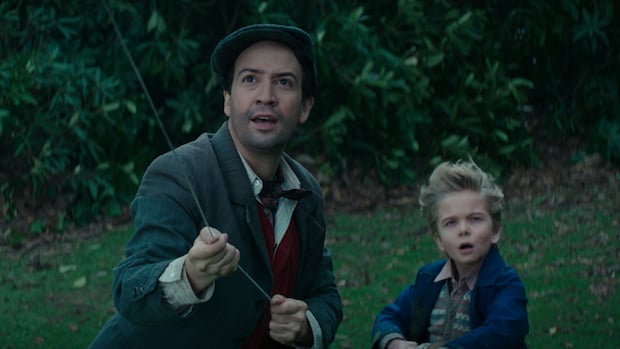 “But there was also music. She realized that music was my way in. So it was not just listening to music sung in the East End Cockney accent, it was music in the 1930s. Because it's not just about the part of the world, it's about the time of the world. It's about the when as well. So I listened to a lot of Anthony Newley, who was a big sort of music hall star who then also wrote a Broadway musical called Stop the World, I Want To Get Off in the 1960s. I listened to a lot of his early stuff and that was my sort of north star for the accent.” 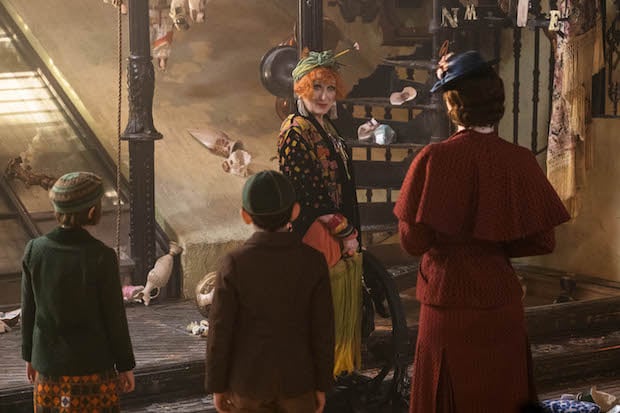 Meryl Streep joins the movie in a hilarious role as Mary Poppins' Cousin Topsy, who lives in an unusual, sometimes upside-down world. Lin said, “every day with Meryl Streep feels like you're in the upside down. It's like, how is this my life? How are we on the ceiling? It was a joy. That's the sequence that I think that as I watch the movie, I watch it more closely every time because it's a triumph of production design, the way every ceiling element becomes a floor element. And then there's Meryl.”

“I talked to Emily Blunt about this. She has done three films with Meryl. She has gone from being her assistant to being the lead of the movie. What Emily told me going in was that Meryl just kind of stays in the character, but not like method like Daniel Day Lewis cobbling shoes. Like she's just kind of in the spirit of it. And I felt so lucky that she was in the spirit of a character that's so mischievous and flirty and fun.”

“There's one moment between setups where Meryl just looked at the kids and went, ‘Hey kids, you wanna know how to do a pratfall?' And she went from standing to face down. Everyone runs in like, ‘Meryl Streep has died!' And she gets up and says, “I learned THAT at Yale School of Drama.” It was just to show off for the kids. I was very grateful I got to play with that version of Meryl Streep.” 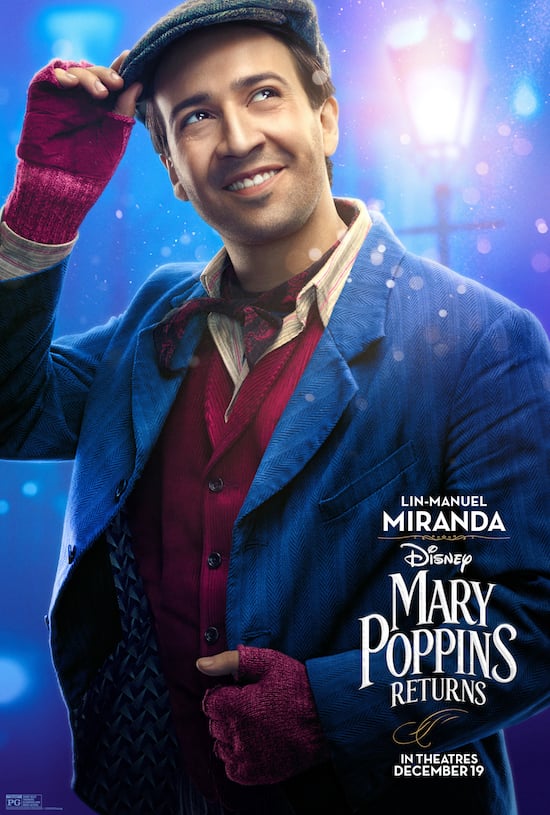 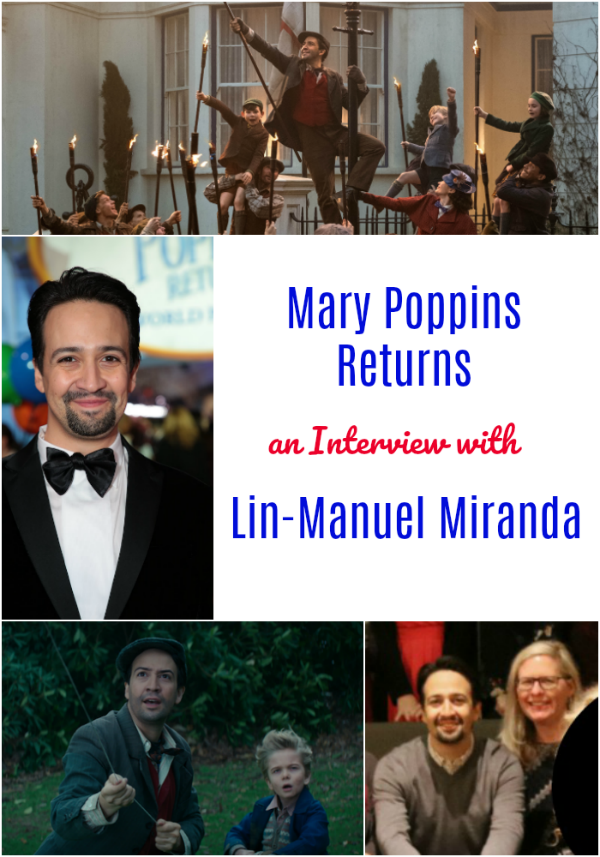