I am participating in the Verizon Wireless Midwest Savvy Savers program and have been provided with a wireless device and six months of service in exchange for my honest opinions about the product.

Last week, I mentioned that I am now part of Verizon Midwest Savvy Savers. Well, I just got back from a trip to Chicago to kick-off our partnership. It was a great two days filled with learning about Verizon, meeting fellow frugal bloggers from the Midwest and getting a brand new “device” to try out for the next few months. 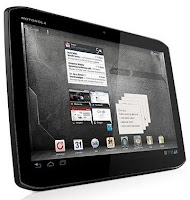 The “device” was kept a secret leading up to the event. We were all trying to guess what it would be and very excited when we finally received it – a Motorola Droid Xyboard 10.1 Tablet. I have never used an Android OS product before, so it takes a little getting used to, but over all I'm finding it to be pretty intuitive. In just beginning to play around with it, I'm loving it so far. Since it operates on the Verizon 4G network, it is super fast.

One of its features is a mobile Hotspot, which means that you can wirelessly connect other devices to use its mobile network connection. So, when I was struggling with the slow WI-fi offered by the hotel in Chicago, I switched over to a connection through the Xyboard and saw a great increase in speed!

I do have to say that other than the not-so-fast internet service, our stay at the Hard Rock Hotel Chicago was awesome!  It's a fun hotel with modern, rock-and-roll themed decor – both in the rooms and in the common areas of the building, which in itself is beautiful and historic as the former Carbide & Carbon Building.  It has a fantastic location right on Michigan Avenue and offers GREAT people watching.  I tried to discreetly snap this photo of a group gathered in the lobby.  Check out the guy with the 4-inch-heeled gold glitter boots!  They were quite the contrast from our blogger group seated on the other side of the lobby.  Needless to say, we were a bit more on the boring side.

And overall the whole trip was fantastic. Mario and I drove down to Chicago and had an easy drive.  Once there, when I wasn't busy soaking up knowledge about Verizon and the Xyboard and socializing with other bloggers, we did a lot of walking and driving around Chicago – always our favorite thing to do when visiting other cities.   We enjoy checking out different neighborhoods to see how “real people” live.  I have already decided that if we ever end up moving to Chicago I want to live in the Pilsen Neighborhood (unless we're fabulously wealthy and end up on Lakeshore Drive.) 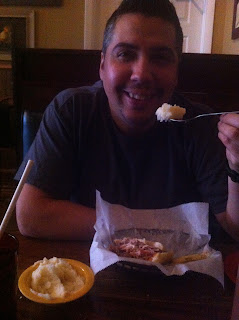 While driving around I played with the Xyboard a bit more, using Google Maps and navigation, looking up information about places we saw, and checking out restaurants on Yelp.  Saturday night we ended up eating at Honky Tonk BBQ after reading the “Diners, Drive-Ins and Dives” list from Google and then Yelp reviews.  It was very good and I'm glad we have a cooler here because we have LOTS of leftovers to bring home. (Note: These 2 pictures in the middle were both taken with my iPhone, not the Xyboard.)   While out and about, I also tried to use the Google Goggles app which is supposed to let you take a photo of a landmark or place and then Google it and tell you what it is, but I didn't have much luck with it.  I'm sure it didn't help that I was trying it from the car….so I'll try it again another time.

I have so much more playing to do with the Xyboard.  Besides what I mentioned above, I have done some things like using the browser, Facebook, Twitter, watched Desperate Housewives through ABC.com (no lag at all!), and used the camera just a bit.  One of the very first things I did when I got the tablet was to take this picture of this fabulous view of Lake Michigan from our conference room. 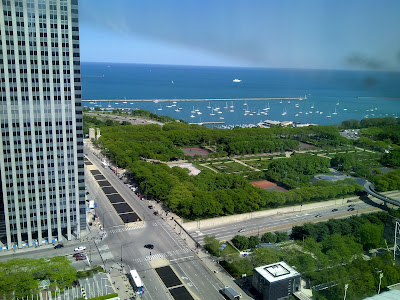 Stay tuned to hear more over the coming months!