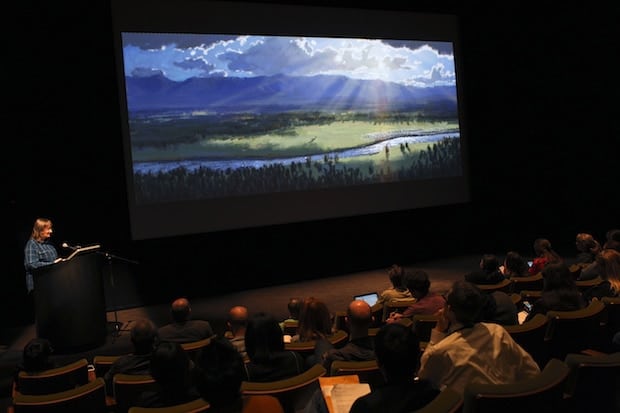 A press day for The Good Dinosaur, including presentations by Director of Photography – Lighting Sharon Calahan, as seen on October 1, 2015 at Pixar Animation Studios in Emeryville, Calif. (Photo by Deborah Coleman / Pixar)

Last week I told you about the first part of my visit toPixar Animation Studios to to learn all about what it takes to bring The Good Dinosaur to the big screen (which will be happening soon on November 25th). In those presentations from filmmakers we learned about how Arlo and his world were created AND a bit about the animation process. But, there was a lot more to learn! 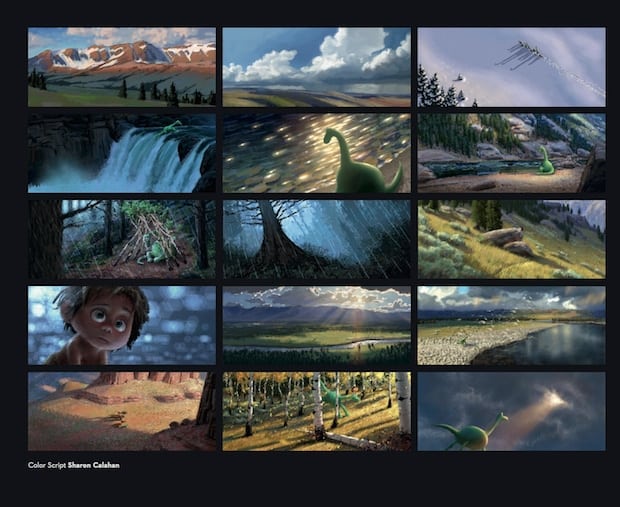 In the session CREATING THE VISUAL DESIGN OF THE GOOD DINOSAUR, Sharon Calahan (Director of Photography – Lighting) spoke to us about the visual design aspects of The Good Dinosaur and showed us the progression from color scripts to final picture. When she started her project, she took inspiration from films that had a lot of heart and were very rich in visual storytelling. The Black Stallion is an example where a rich story is illustrated with images rather than dialogue. Never Cry Wolf was another important reference as a film where the landscapes play a key part in the the story. Other films were inspirational for scope and scale like 7 Years in Tibet. Sharon also watched every film she could find that was set in the Rocky Mountains. It sounds like lot of movie watching went into the design of the film!

The research trips the filmmakers took the American West also were key in developing the visual design of The Good Dinosaur. Sharon was already very familiar with that area, but she was anxious to share it with the other filmmakers, especially Directer Pete Sohn, a true New Yorker. The found themselves focusing quite a bit on the Yellowstone area because Pete wanted a primordial feel to the film without making an imaginary world that might have happened millions of years ago – something that COULD happen now. With all the geothermic features in that area, they were able to get the inspiration for the bubbling steam and other features for the film.

They also spent a lot of time taking photos of very detailed elements of nature like rocks, tree bark, pine needles on the ground – all details that would be important to incorporate into the film. Besides photos, Sharon also broke out oil paints and canvas to capture the natural beauty to inspire the story artists for possible settings. Her paintings were so beautiful, it's hard to imagine that they are just her version of notes. 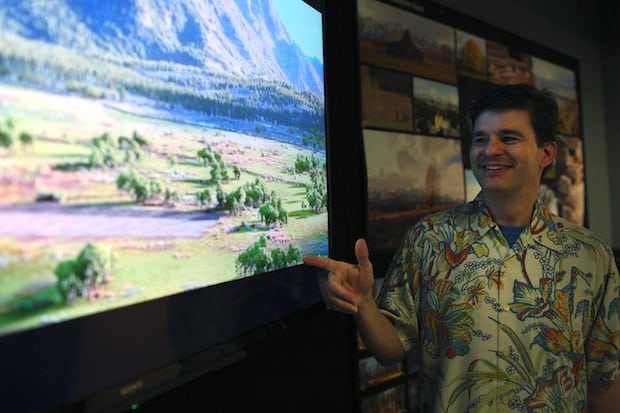 A press day for The Good Dinosaur, including presentations by Sets Supervisor David Munier, as seen on October 1, 2015 at Pixar Animation Studios in Emeryville, Calif. (Photo by Deborah Coleman / Pixar)

In our next session, VIEW FROM ABOVE, Sets Supervisor David Munier told us about creating the expansive world in the film. The Sets Team builds all of the environments for the film and is in charge of creating everything we see on the screen that is not a character or a special effect (like rain, snow or fire). In this film, Director Pete Sohn wanted to be able to capture beautiful environmental cinematography and wanted to be able to look off into the distance and see 50 miles in the distance. In most animated films that might be done in one scene in the movie, but in this film we wanted to be able to do it all the time. That meant the need to make it feel like a beautiful, cohesive photograph. 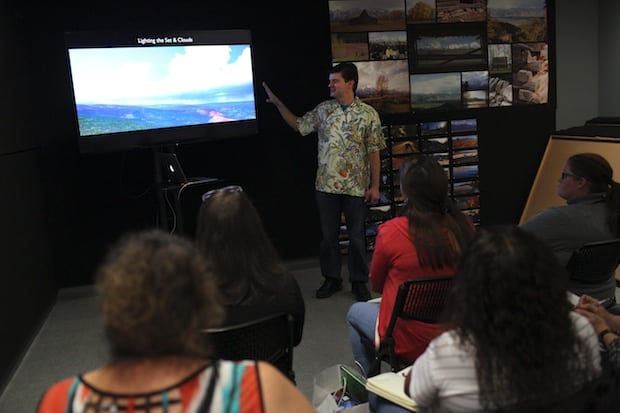 A press day for The Good Dinosaur, including presentations by Sets Supervisor David Munier, as seen on October 1, 2015 at Pixar Animation Studios in Emeryville, Calif. (Photo by Deborah Coleman / Pixar)

To accomplish this, the sets team used actual U.S. Geological Survey (USGS) data of the northwest United States to create the sets. They downloaded height data to build a perfect foundation to build the movie. It gave them a general topography to build upon. They downloaded Yellowstone Park and other areas of Wyoming, Idaho and Montana to give the director lots of different options of where to set scenes. They then added detail on top of the terrain data – like rocky cliffs and trees – to get a more complete look.

PROGRESSION IMAGE 5 OF 6: ANIMATIONAfter the Layout team has completed their work, the characters are animated and brought to life by the Animation department. Animators create the personality and “acting” of the characters. Any secondary motion such as hair, fur, or feathers is added by the Simulation department, and this simulation allows the hair or fur to move naturally with a character’s movement. ©2015 Disney•Pixar. All Rights Reserved.

In the session EFFECTIVE STORYTELLING, we explored how the Effects team created different environments using effects to support the storytelling with with Effects Supervisor Jon Reisch. Effects (or FX) adds all the fine details to the film needed to create believable interaction between the characters and their world. They are responsible for all of the natural phenomenon you see in the world like like rain, fire, smoke, mist, fog, water, etc. They give the film both believability and the WOW factor with big visual sequences. 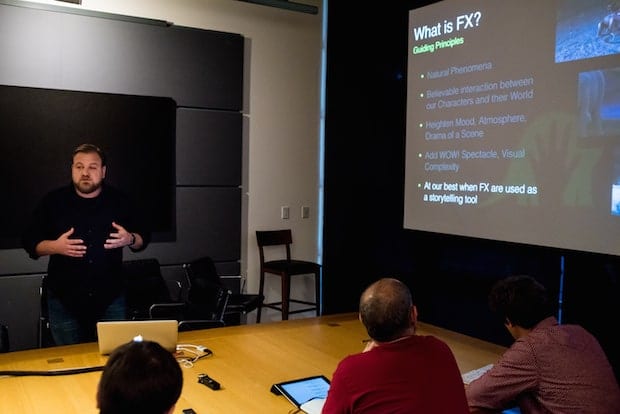 There were some big technical challenges to deal with on The Good Dinosaur. It has such a HUGE scope and scale.

The story is about a journey through nature and it needed to feel real for Arlo. As Director Pete Sohn said, it couldn't feel like “a walk in the park”. Effects had a big role in making that happen. Arlo the dinosaur, who is 18 feet tall, needs to look like he is dwarfed by the landscape. Arlo also has to travel many many miles and that whole journey has to feel real. That meant FX was in 900 shots in the film, which is about twice as many as they usually are.

One of their biggest challenges was the river because it is so difficult to deal with water. A lot goes into making it realistic and even for a very simple realistic look takes a lot of elements. For the river to play such a big role in The Good Dinosaur, it added a lot onto the plate of FX.