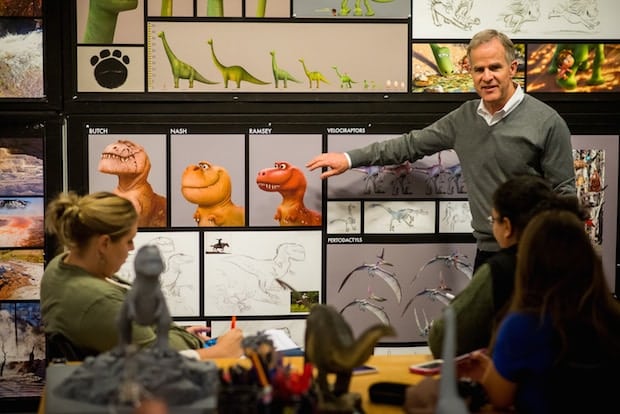 As we get closer and closer to The Good Dinosaur coming to theaters on November 25th, I get more and more excited to see the full effect of Arlo (the Dinosaur) and his amazing world coming to life on the big screen. While visiting Pixar Animation Studios last month, I had a chance to sit in on presentations from some of the filmmakers who went into detail about how Arlo and his world were created. It’s more than a little bit mind-blowing all the creativity, research, work and engineering that go into making that all happen.

One of our first sessions was DESIGNING A BIG WORLD, where Academy Award-winning Production Designer Harley Jessup explained how the Art department designed the variety dinosaurs in the film and their surrounding environments. I was struck by Harley’s passion and excitement over sharing details with us. It was infectious and part of the reason my opening statement of this post is that I am so excited to see The Good Dinosaur in full.

I had previously told you about the research trips the filmmakers took to prepare for making the film. Harley explained how they had to look closely at every part of the natural world, from the grass, leaves and different kinds of vegetation – aspen bark, sage grass, the way tree bark grows, etc. They were looking at rock formations and mountain ranges and particularly rivers and waterfalls. They looked at the river as the “spiritual spine” of their movie. Arlo has to follow the river to get home. Sometimes it is a glittering beautiful calm ribbon but other times it is a rushing torrent. The geysers, steam vents and hot springs in Yellowstone were also a big inspiration. 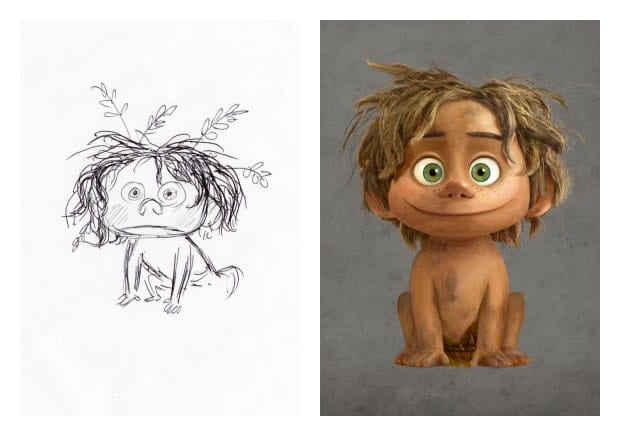 He also told us about the character design. For each of  these they start with pencil and paper and then traditional clay. He showed us an in-progress sculpt of Spot where they were working out how the character could walk on all fours. The human body isn’t really set up to look like that. They ended up with very canine articulation on the model and then the animators took it the rest of the way. 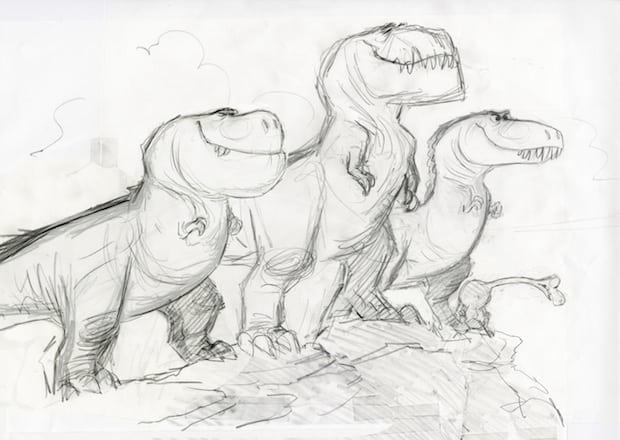 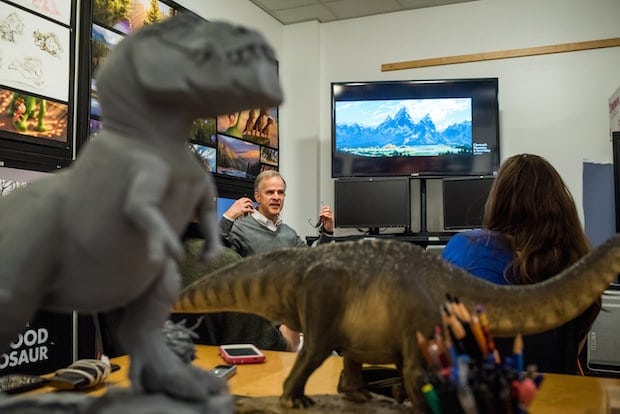 Harley then told us about some of his favorite characters, the T-Rex Butch and his teenage kids – daughter Ramsey and son Nash. One of Director Peter Sohn’s ideas would be that their posture would be pulled up and the animation would be that they looked like cowboys on horses (since they are ranchers in the film). They even tried to subtly evoke that with their coloring. You really do see that “cowboy look” to the T-Rexes in the film (and the voice of Sam Elliott as Butch cements the cowboy image).

A press day for The Good Dinosaur, including presentations by Animator Kevin O’Hara and Directing Animator Rob Thompson, as seen on October 1, 2015 at Pixar Animation Studios in Emeryville, Calif. (Photo by Deborah Coleman / Pixar)

Our next presentation was “ACTING” LIKE DINOS with Animators Kevin O’Hara and Rob Thompson , who gave us an animation demo highlighting the reference used by animators to inform the movement of the dinosaurs. Since we don’t have real-life dinosaurs to study to mimic their movements in animation, the animators had to find another real-life example to use. They went with elephants! 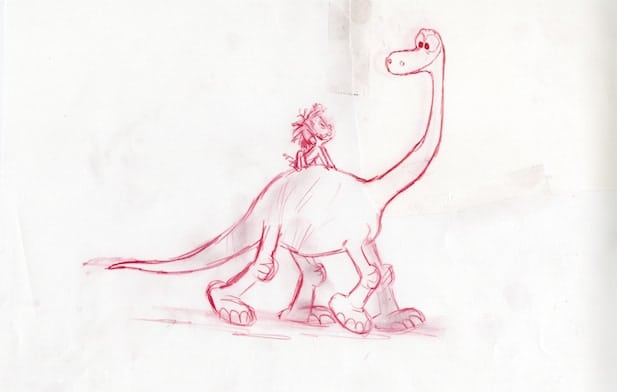 By carefully studying the movements of elephants they were able to use that info to develop the lifelike way that Arlo moves. The first start in designing that movement is by breaking the motion of a walk down into only four drawings. I wish I had a clip to show you because seeing how just four different drawings repeated over and over can look like a dinosaur actually walking is pretty amazing.

A press day for The Good Dinosaur, including presentations by Animator Kevin O’Hara and Directing Animator Rob Thompson, as seen on October 1, 2015 at Pixar Animation Studios in Emeryville, Calif. (Photo by Deborah Coleman / Pixar)

After the basics comes the big process of fleshing out the animation. Every bit of movement has to be reworked and refined to look natural – from the shifting weight of the body to how one piece of the body moving can affect another. For a simple 10-15 second clip of Arlo climbing on top of a rock (that’s what is on the monitor above), it can take an animator several days to complete. That shows what a huge amount of work goes into creating the complete film.