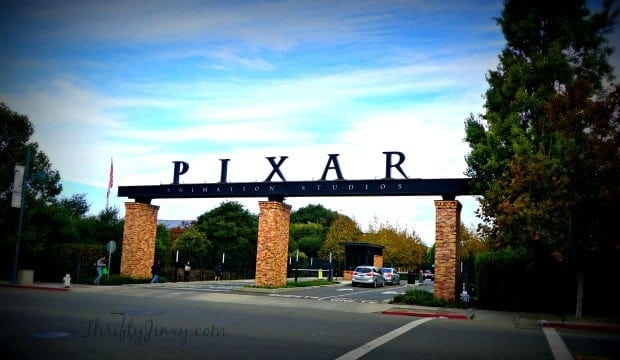 There's nothing quite like getting a sneak peak at places where magic happens – and that's exactly what it was like visiting Pixar Animation Studios in Emeryville, California a few weeks ago. Creativity flows freely thorough this beautiful 22-acre campus. I was lucky enough to visit the campus and take a tour of The Steve Jobs Building. Here are a few of the highlights! 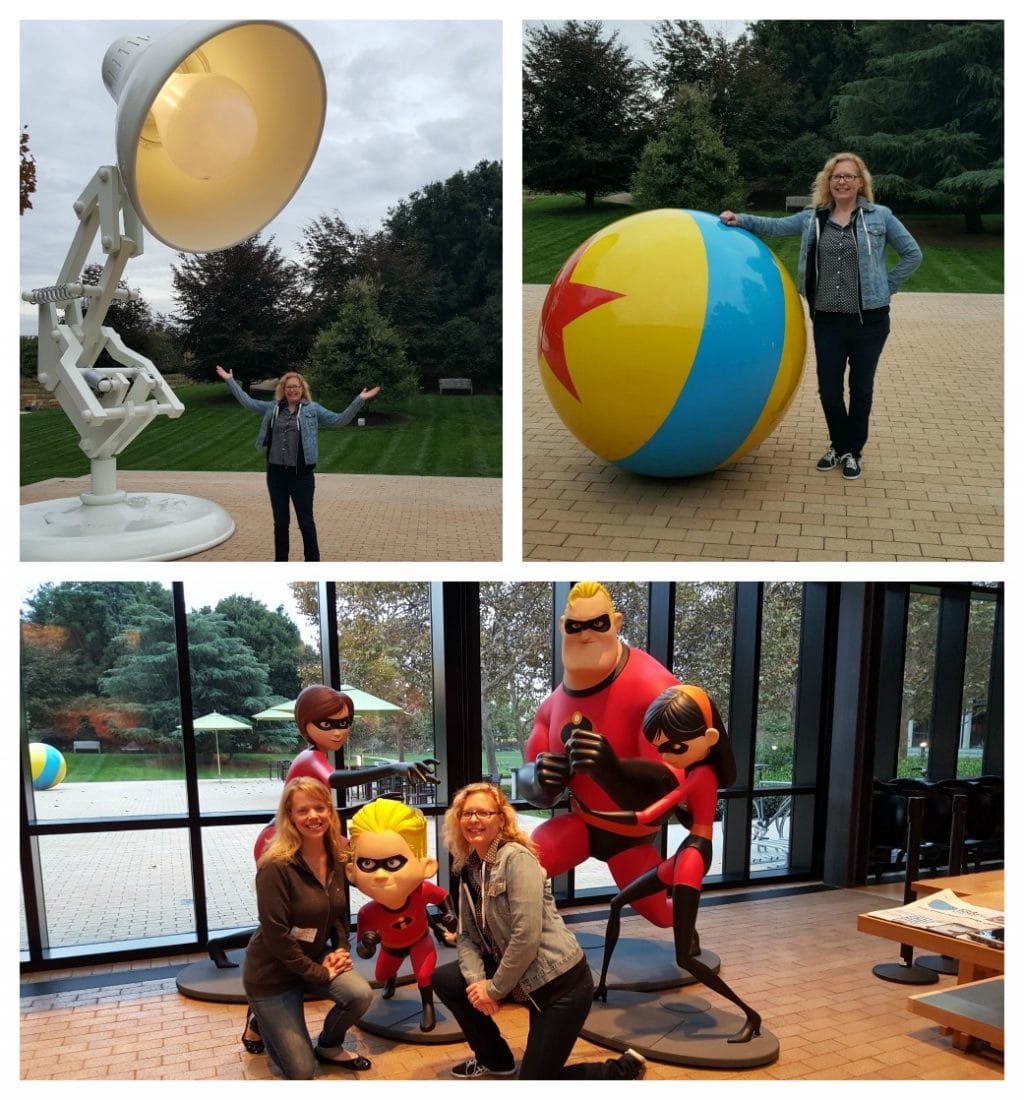 As soon as we arrived on the campus, we were greeted by a giant version of Luxo Jr., the Pixar mascot, and his big bouncy (well not so bouncy in this case) ball. These giant creations were actually made by a company in Melbourne, Australia, for a visit of traveling Pixar artwork. I'm glad they made their way to California because they are perfect for photo opps! 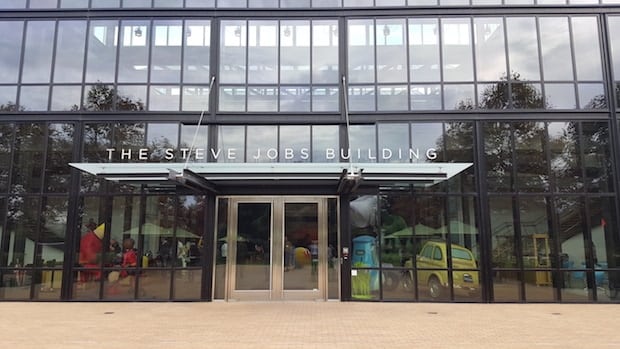 The main building on the campus is The Steve Jobs Building, designed by Steve Jobs himself. The front of the building is glass from one end to the next and offers a look at the magic inside. 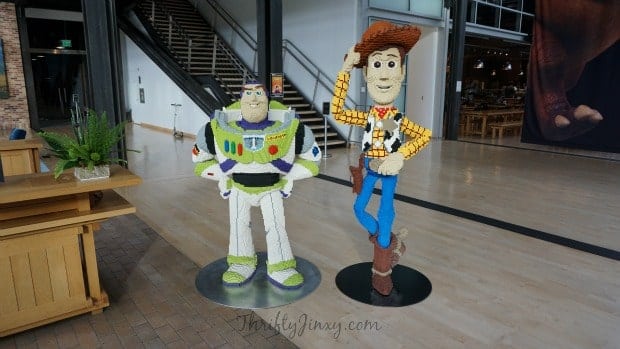 One step inside The Steve Jobs Building and I thought “hmmmm….this is the kinda place were I would want to work!” – – and that was even before I noticed that LEGO Buzz and Woody were waiting to greet me. 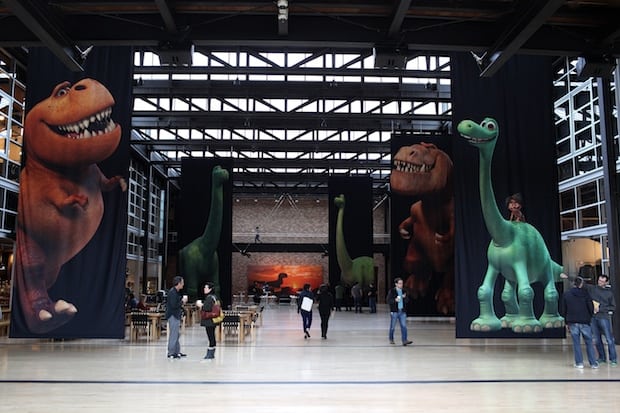 The atrium, with The Good Dinosaur artwork, as seen on September 30, 2015 at Pixar Animation Studios in Emeryville, Calif. (Photo by Deborah Coleman / Pixar)

Immediately inside the front doors is The Atrium. This huge two-story area is designed as the meeting space for the campus where employees are encouraged to come together. It houses the cafe, mail room, gift shop and lots of seating area. There is even a free cereal bar for employees with tons of choices of cereal and milk! 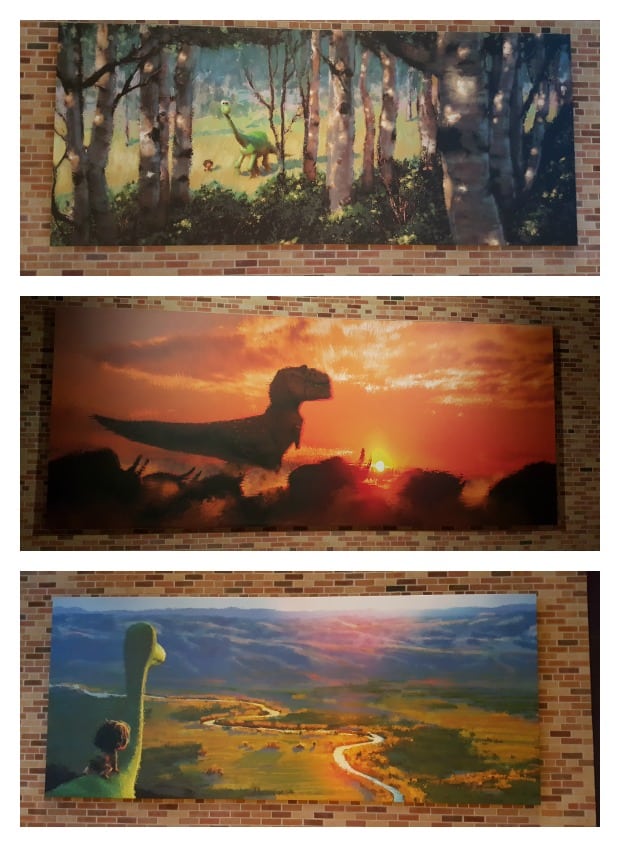 The Atrium is always decorated with images from a current Pixar project, which right now is The Good Dinosaur. The two-story banner of Arlo on the right side of the photo two pictures up is actually “life sized” – which let animators know how big Arlo would be if he were walking around in the Atrium itself. It helped them keep things in perspective size-wise while working on the film.  I also loved these large paintings of The Good Dinosaur scenes placed in seatings areas. 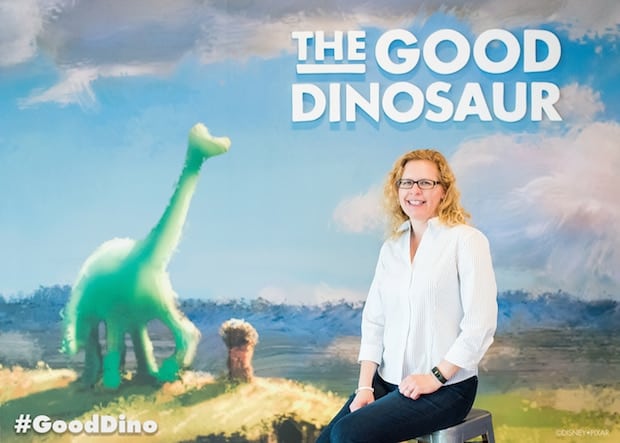 I also got to have my own portrait taken with a The Good Dinosaur scene. I think the reason I love all of these paintings os much is because they remind me of the scenes in the movie itself, which are SO BEAUTIFUL! I can't wait to be able to see the whole film put together in its entirety. 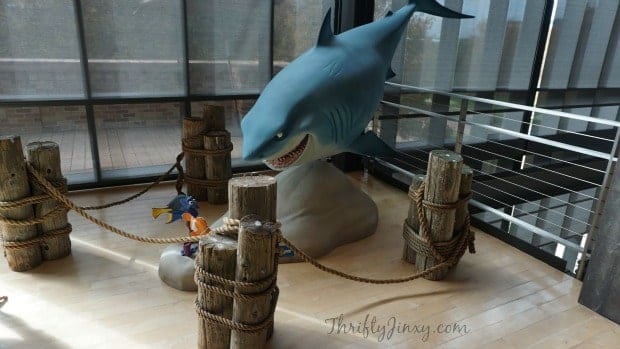 Besides spending time in The Atrium, we also visited the other areas of The Steve Jobs Building where the work actually happens. But, because of the secrecy involved in protecting yet-unreleased films, no pictures were allowed. We had a chance to see the workspaces where all the creative and technical work goes into creating those Pixar masterpieces. We also had a lot of time to sit down and learn what goes into making an animated film and I'll be back next month to tell you more about that. 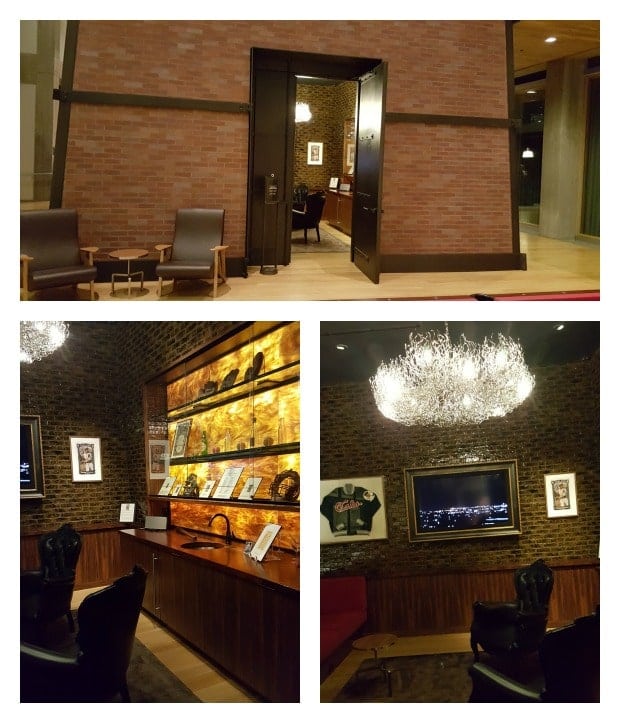 Beyond The Steve Jobs Building, we also spent some time in the Brooklyn Building, where they do pre-production work. The coolest thing we saw is the Hearth Lounge, which is a small cozy den-like lounge built right into the back of a giant fireplace!

It was fascinating touring the place where so many of our animated favorites were created, including the soon-to-be-released The Good Dinosaur!

Come back tomorrow and I'll share some exclusive photos from our  trip inside the Pixar Archives to explore the history of Toy Story in celebration of its 20th Anniversary.