Most of you know that I was at BlogHer (the big ‘ol blogging convention) in San Diego last week and I thought I should fill you in a little bit about what I did there. This was my third year at BlogHer and I think that each year it keeps getting a little better.

It was a whirlwind several days.  My time was filled with sessions (although I only made it to one official session this year….), parties, meetings with brands, the Expo Hall and spending time with other bloggers.  Every day was jam packed – running from about 8 am until at least midnight every night.  I was sooooo exhausted by the end, but it was more than worth it.  Rather than spending a lot of time going in to details, I will share some pictures with you and a few little tidbits.

The parties were a super fun part of the weekend.  There were both BlogHer official parties and private parties.  My favorite BlogHer party was the Social Fiesta, especially because of the Latin music, but CheeseburgHer was a close second….also with great music – old school hip hop and 80s/90s tunes.  The private parties, in particular The Clever Girls Collective “I’m With the Brand” party (with a super cute Smurf theme) and the Cheap Sally Dance Party were also awesome.  I can’t believe I didn’t take pictures there! 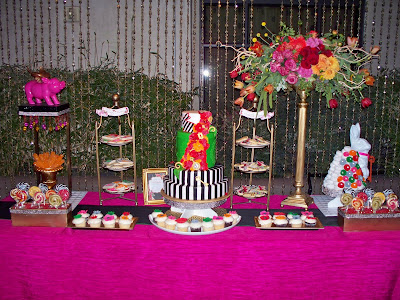 Beautiful table displays at the Hostess with the Mostess Launch party.
I spent a lot of time in the Expo Hall and Mario actually spent more time there than I did (He’s a good talker!)  It was great to meet in person with reps I have worked with before via e-mail.  We made a lot of new connections with brands and we have lots of great new things lined up to share with Thrifty Jinxy readers in the near future.  I love taking cheesy pictures with characters/mascots, so we have lots of those! 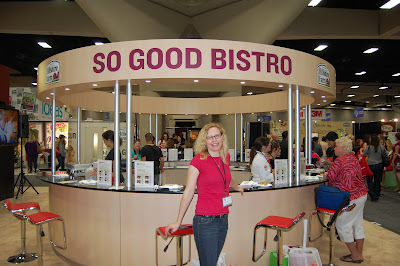 Hillshire Farms served up lots of good things to eat in their booth.

Me and my Brawny Men!

This is my second year in a row taking a picture with the Jimmy Dean Sun. I love that guy!

When my nephew saw this one he asked “How did you GET to Sesame Street?” 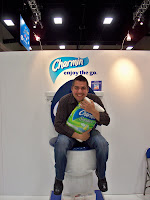 He did it….he squeezed the Charmin! 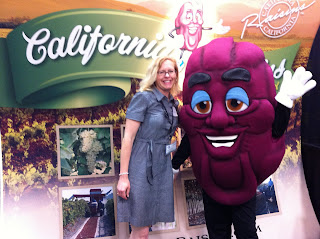 One of the great parts of the weekend was meeting with other bloggers – both those I have met before and those who I met for the first time.  With 3,500 people attending it was hard to see everyone I wanted to, but it’s funny that I often would run in to the same people over and over again since we primarily had the some interests and moved in the same circles. 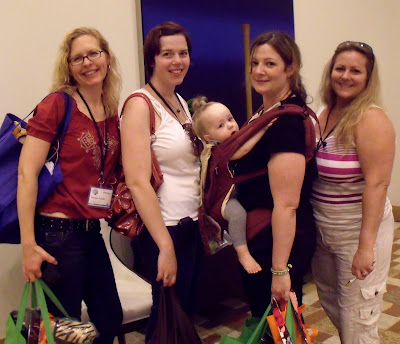 Me, Erin from Slice o’ Heaven, Jamaise from Wishing Penny (and her adorable daughter Capri), Jennifer from Eighty MPH Mom. The picture was taken by Valerie from Sweeps4Bloggers.

So, that’s it in a nutshell.  I’m already looking forward to next year’s BlogHer being back in New York!  The location is perfect for us because we can combine the conference with visiting family and friends.  Only about 357 more days to go!