Obviously, one of the coolest things about Iron Man is his “equipment”:  the Iron Man Suit and the Arc Reactor that keeps him going. For an inside look at the making of this coolness, we had a chance to get the exclusive scoop from Russell Bobbitt, Iron Man 3 Prop Master, and Chris Swift, Legacy Effects On Set Coordinator. It is amazing to see the amount of time and effort that goes into these important elements of the film. 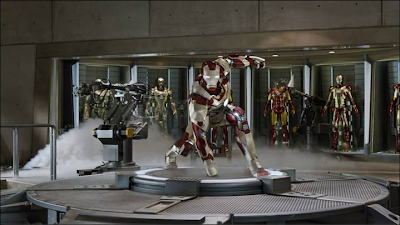 First we spoke with Chris Swift.  Legacy Effects has created the suits for all three Iron Man films and the process has changed substantially since their first creation.  Chris started by explaining that the current version of the suit worn for filming does not have legs, a change from the original suit.  Chris explains:

It took us about three months to work out the first prototype. But remember that one had legs to it. So after the first movie, because Iron Man is supposed to stand about six foot to six foot six (depending on who you ask) and Robert doesn’t quite fit the bill…He’s about — he’s about ten inches too short. So we can’t really stick Robert in a full suit with those legs because his feet end up right about where the ankle is -right about at mid-shin or something like that.  So, we had stunt guys that were tall enough to fit into that suit that would utilize the legs. But after that it didn’t make much sense. So they wanted to basically just make them all around Robert and then they would digitize the legs from waist down. So that’s the way that works.

Q : For the new movie, how long does it take you to make the suits?

Chris:  Every time they do an Iron Man suit, they redesign it. The wonderful designers here at Marvel do the most awesome job of designing things. But they’re designers, not practical builders.  And the practicality to building a suit to make it work and functional that necessarily isn’t taken in consideration if you don’t understand what that’s all about and you don’t do it when you’re designing something. So then we have to take the design that’s given to us that looks so great and go “Ooh, wow, and how do we make this move?”  You’ve got bars going right across where something would move, so now we’ve got to re-engineer this and re-figure it out how to maintain that look and still make it practical to where somebody can wear it and move around in it.

So the reason why that’s a hard question is because we don’t know what the design depending on what the design is. So if we took the mark 42 which is in the newest movie, that one took us a little bit to calculate how to make it a practical moving suit. I would say we spent more time in the computer trying to figure out how to make it move and engineer it from the design then we did actually building it. So, it’s probably a good two months in the computer.  Then once we started actually physically building them we worked all the problems out there. They went together pretty quickly.  I sit with the computer guys and engineer them and we rapid prototype those, meaning we’ll design it in the computer and build it in the computer. And then we send that computer file out. And there are machines that will actually take those pieces that we’ve engineered and actually cut them out and come back with full finished pieces.  Then we have to take those, clean them up and make them all and go through the whole process. But they all fit together like a puzzle at that point. So if you’ve done your job right (meaning me), then all those pieces should fit together really easy. And it should come together like a little toy.  Putting them together was quite quick.

Q : So does Gwyneth actually put on her own suit?

Chris:  No, she put on Robert’s suit.  Believe it or not, Gwyneth fit the suit really well because she’s actually quite tall and she’s really super built and strong and all that kinda stuff.   I was really surprised that it fit on her.  The funny story with that is is that everyone bet me that I wasn't going to get Gwyneth in the suit because ofthe fact that it’s like a big iron. But I was determined because every fan wanted to see Gwyneth in the suit. She was really cool about the whole thing and once she got in it, she had a ball.  I couldn’t get her out of it.  She was running around and fighting with her kids and she didn’t want to come out.  It was funny ‘cause she just — sh– it was — she was the belle of the ball in the suit. So it’s wonderful. So it was — it was a fun moment.

Next up we spoke with  Russell Bobbitt, Iron Man 3 Prop Master.  Russell has an amazing history in the movie-making industry.  (Check out his list of credits on IMDB.)  He creates what I have always known as the Arc Reactor, but what they call the R.T.  As Russell explains:

How the R.T. works

Since Iron Man 1 we made all those to fit and Robert's body has changed over the years, as many of ours do. So we take a cast of his chest and we mold the piece right to his chest. Every scene we glue the thing onto his chest with special effects makeup glue. So he has to shave his chest area right there so it stays on.  Then, by remote control, I turn on and off the light for each take because it runs on a little cell phone battery and there are ten minutes of running time.  He certainly doesn’t appreciate it being torn off his chest to change the battery a whole lot, so I have it on a remote control to turn it on and off. And it’s an accumulative ten minutes, so like a football game,  ten minutes can last up through lunch time,  as long as I'm turning it on and off.

About the evolution of the R.T.

In “Iron Man 1” we couldn’t get the transmitter small enough to put in the remotes, so I would have to come up to Robert with a little bobby pin and stick it in a little to turn its switch on and off between takes.  If you watch Iron Man 1, it had very emotional scenes.  And the prop guy is over there at his chest going, “Oh, wait. It didn’t turn on.”  So  then for Iron Man 2 the stuff got smaller.  Then for Iron Man 1 we have the remote controls.