For all the latest direct to your inbox
the latest
Home » Entertainment » My Interview with Sam Claflin and Jena Malone from THE HUNGER GAMES: CATCHING FIRE 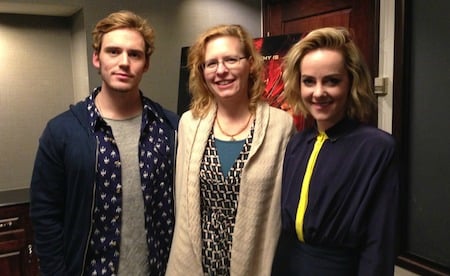 Last week I told you about my fun meeting with cast members of   and shared my interview with Meta Golding and Bruno Gunn.  Well, that same day I also had a chance to speak with stars Sam Claflin and Jena Malone.  They play Finnick Odair and Johana Mason, former Hunger Games champions who are called back to the games again.

THE HUNGER GAMES: CATCHING FIRE begins as Katniss Everdeen has returned home safe after winning the 74th Annual Hunger Games along with fellow tribute Peeta Mellark. Winning means that they must turn around and leave their family and close friends, embarking on a “Victor’s Tour” of the districts. Along the way Katniss senses that a rebellion is simmering, but the Capitol is still very much in control as President Snow prepares the 75th Annual Hunger Games (The Quarter Quell) – a competition that could change Panem forever.

An Interview with Sam Claflin and Jena Malone

I spoke with Sam and Jena, along with Samara from Simplicity in the Suburbs, and they answered a few of our questions:

Had you read The Hunger Games books before being cast?

Sam – I’m not much of a reader, I play sport.  I watched the first film and had no idea it was related to any trilogy of books.  When I heard from my agent I had an audition the next morning I tried to do a little research about the character I found there were 3 books and I obviously didn't have time to read them overnight.  I went into the audition quite blind sighted.  Before the recall I had a chanc to read the books.  {Now THAT'S an honest answer!}

Jena – My little sister, who is a GIANT fan of the novels, kept asking me to read the books so I finally I read all three within 48 hours while sitting in bed with ice cream after having my wisdom teeth removal surgery. 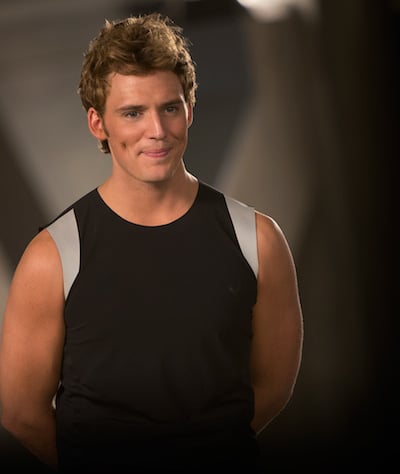 Was preparing for the physical aspects of the film similar or harder to do than other training you have done?  Jena, was it similar to Sucker Punch?

Jena – I  was working with the same team, so I came in and felt like I knew them and they already knew what I could do…. I could throw this punch, and I could do this move  and I was good with this kick and with these weapons.

Jena – I spent 8 months with these guys!  They had me dead lifting 235 – I was a complete transformation.  So I felt I already knew that I could go in there and kill with my body because they had already taught me that.  But if I hadn't already had that, I would have been really intimidated.

Sam – I feel like I kind of adapted immediately.  I'm from a sporting background and I played a lot of soccer when I was a kid.  I have always been interested in getting my hands dirty and my hands scraped.  My childhood consisted of me climbing trees and running away from home a lot (that's a lie).  When my friends were telling me the other day that when I set my mind to something I can happily manage doing it.  I think the workout routine and the fully intense diet – I embraced that from the get-go and never struggled with it. 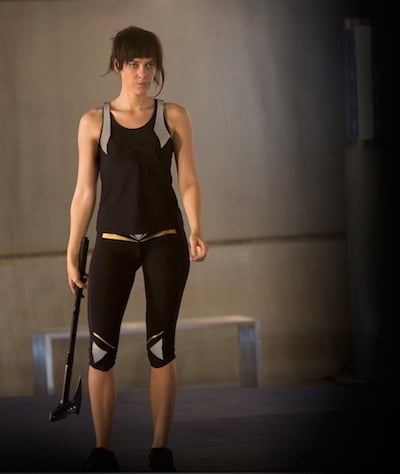 What was the best and worst part of the filming experience?

Jena – The best was getting to work with such an incredible cast and falling in love with every one of them and getting to join such an amazing family.  The worst – I don't know if there is a worst.  There were moments where things hurt, but hurt in a good way.  It was a challenge

Sam – I was going to say that was my worst – getting hurt.  We were living in really treacherous terrain.  We were shooting in Hawaii and as beautiful as that sounds, it was winter and it was raining with very steep hills and tough at times.  My worse was undoubtedly breaking my finger.  The best for me was of course finding out I was playing Finnick Odair, but I didn't really believe that it was real until day 1 of arriving in Atlanta and sitting in the makeup chair and having my hair done and kind of getting the schedule put in front of me, the final script, the costume.  The moment of “Action” is when nerves kicked in.  Everyone made us feel very welcome as the new fresh meat.  I can only be very thankful for that and feel lucky to have people make us feel so welcome.