The holiday season is even better when there is a REALLY GOOD family movie to go see. This year we hit the jackpot with Disney•Pixar’s COCO opening in theaters on Thanksgiving! Last week I had a chance to interview Pixar's Chris Bernardi, who shared a bit about the amazing work that went into creating Coco's Land of the Living and Land of the Dead.

Chris is the Sets Supervisor for Coco. He explained, “My team and I build the environments – the worlds the movie takes place in. If it's the sky or a marigold petal that's sitting in the gutter, or the gutter, or the cobblestones or the doors or the architecture or anything, it is up to my team to build those. It's about building the world that they live in. I like to say that if it doesn't talk then it's probably my department.

How big is  team – Throughout the course of the film we probably have about 30 or 40 people. It differs from film to film and it kind of depends on how long the production cycle is. If you have a long production cycle, you can run with a smaller team, which is what I prefer because you have a small group of people who are really invested that you work with closely. Other films, if the schedule gets compressed at the end can swell to like 50 people and then you're kind of working on  top of each other. At peak we are probably having about 20 people on the team at a time.

Chris said Coco's Mexico City premiere was amazing. He said Coco is ” a love letter to the people and culture of Mexico” and the reception it received was just incredible. But that was far from the first trip the crew made to Mexico. Years earlier they had visited to research the people, places and culture. Not only was there a lot to learn about Mexico, but Chris said he learned a lot about the Day of the Dead. “I knew a little bit about the iconography, the skulls, but didn't know much about the holiday itself. We learned more what it was really about. We have Thanksgiving to be thankful and holidays about family, but this is a time to stop and think about the people who came before you and people you loved and thinking about them being there with you is such an incredibly sweet sentiment and moved us all.” When you watch Coco, just before the end credits, be sure to catch the wall adorned with mentions of the departed family of the cast and crew, including Chris's grandparents. Chris said that all of these people are those “we remember who inspired us to be where we are. ”

Those skeletons he mentioned lead to challenges. “For example,” said Chris, “we had to find out if our simulation software would work with a waist that has been tightened up with a belt and is so small around and how would that drape across the hips? Will it look weird? There were tons of iterations to make it all work and perfect it all. Usually we joke that we don't really finish a film, we just have to be pulled off of it.” Those movies DO have to get to the theater at some point! 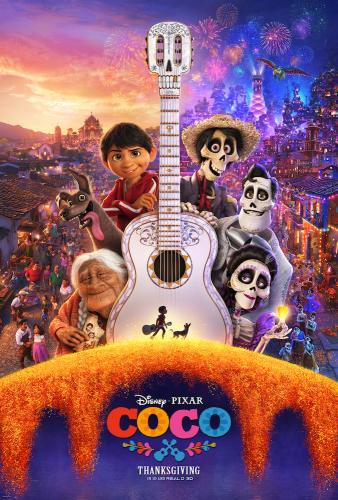 Chris explained that “if you look at a COCO poster, you can see that a lot of the buildings are outlined by little, tiny lights. It really helped us read the towers when they got further away, but introduced yet another problem. Our team wrote a script to turn each of those little bulbs into a light that the Lighting department could use, but the scope of the towers grew in the telling to some extent. We wound up dumping 8 million lights into the scene and our software was really not designed to handle that, so we worked out a whole new technology for managing that. We kind of knew we were going to be heading down that path when we were working on the graveyard because we did a similar thing for all the candles – there are just a ton of candles in that graveyard.”

“There was a lot of trying to figure out how to deal with things on the scale we working with and a lot of buildings, a lot of lights, and trying to figure out how to manage it both from a technical standpoint – how can we move this much data around on our network and load it onto our computers and how can the other departments work with it, as well as how can we visually make sense of it so its not just a big mess up on the screen. So, working with lighting to give us separation and depth and different things to help guide the eye and let you know where you're supposed to look.For all that we put in there, its important for us that we're not taking away from the story.”

Hidden Details and Things to Watch For in Coco

With so much going on in Coco I think you just want to watch it straight through and enjoy the story on your first watching. But, when you see it your second or third time there are some hidden scenes and details you can try to spot! Chris said, “In the Land of the Dead there are just a couple of shots where you will catch bone-shaped cobblestones. One of them is when we are looking down at Dante and another time is when people are dancing on them.”

“There is also a shot in the Marigold Grand Central Station when (characters) are walking across a bridge and it's a big, beautiful sweeping shot. It's easy to just take in all of the iron work and the scenery and we are trying to guide you to see them going across the bridge, but if you look down into the crowd there is a ridiculous number of little skits and things happening. The Crowds eam and Second Unit team just went a little nuts. There is a poor balloon floating away, a guy chasing after a trolley and a ton going on in there. Chris also shared that there are lots of Easter Eggs including the Pizza Planet truck, A-113 and we always have a little something from the next film that's coming up, so there is an Incredibles 2 thing in there.”

Despite his family’s baffling generations-old ban on music, Miguel (voice of newcomer Anthony Gonzalez) dreams of becoming an accomplished musician like his idol, Ernesto de la Cruz (voice of Benjamin Bratt). Desperate to prove his talent, Miguel finds himself in the stunning and colorful Land of the Dead following a mysterious chain of events. Along the way, he meets charming trickster Hector (voice of Gael García Bernal), and together, they set off on an extraordinary journey to unlock the real story behind Miguel's family history.

Despite his family’s baffling generations-old ban on music, Miguel (voice of newcomer Anthony Gonzalez) dreams of becoming an accomplished musician like his idol, Ernesto de la Cruz (voice of Benjamin Bratt). Desperate to prove his talent, Miguel finds himself in the stunning and colorful Land of the Dead following a mysterious chain of events. Along the way, he meets charming trickster Hector (voice of Gael García Bernal), and together, they set off on an extraordinary journey to unlock the real story behind Miguel's family history.