Gwyneth Paltrow is a BIG name these days.  From publishing her best-selling cookbook It's All Good, to being named People Magazine's Most Beautiful Woman, to starring in Iron Man 3 with Robert Downey, Jr. – she is HOT!  On my trip to LA last week I was really looking forward to meeting Gwyneth to see how she compared to her portrayal by the media and what she is really like. 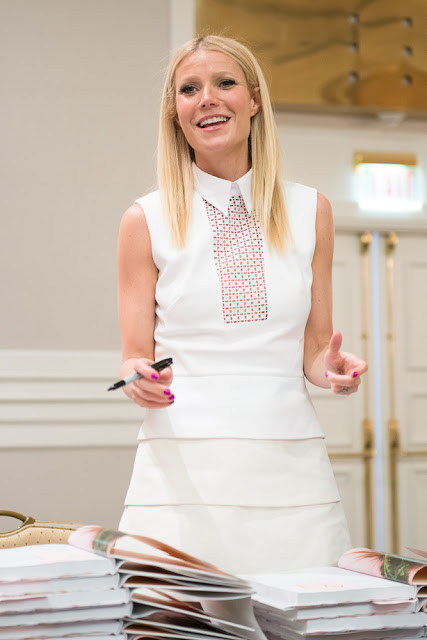 I had the chance to do that in a group interview just hours before the Iron Man 3 premiere in Hollywood and just hours after she had been named People Magazine's Most Beautiful Woman.  Gwyneth isn't one to agree to many interviews, so we were extremely lucky to get this opportunity, especially on such a big day.  It was strangely quiet in the conference room as we waited for Gwyneth to arrive.  I say “strangely” because when a group of blogging women get together there is usually a constant hum of excited conversation.  I think we were all a little excited and anxious about her arrival and our thoughts were focused on that. 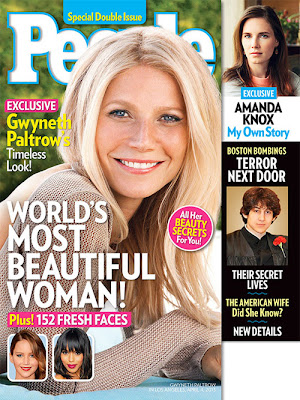 When Gwyneth walked through the conference room doors, smiled and greeted us with a friendly “Hi, guys!”, I thought WOW – THAT'S why she was named Most Beautiful Woman.  She practically glowed in her beautiful white dress.  I mean seriously, she is gorgeous.

But the thing is, I wasn't just impressed by how gorgeous she is.  I was impressed by how funny, friendly and NICE she is.  As with any celebrity, bad things have been written about Gwyneth.  I just kept thinking that there is NO WAY that anyone who wrote those bad things had ever met her in person.  Not only did she happily answer all of our questions, but when others were speaking she listened with sincere interest.  Particularly when we broke apart from the interview to take a group photo, she engaged in two-way conversations – being just as interested in hearing from others as she was in talking herself. 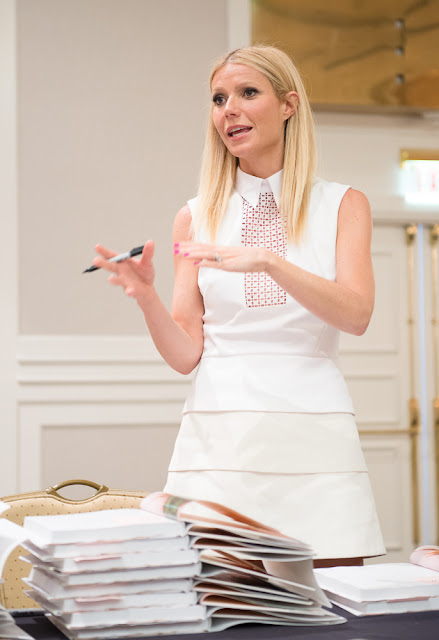 Speaking of Gwyneth talking, I should actually share the interview with you!  Here are some highlights.  You might consider the first question a spoiler, because YES she does put on the suit in Iron Man 3, but you have probably already heard that elsewhere.

Q: Tell us about putting on the suit.

I loved putting on the suit.  I’ve never done anything like that in my whole career. My son was on set, and so I’ll never forget it.  I walk out onto the set fully dressed in the suit, and I’ll never forget his face.  He was in shock and awe. It was so cool.

Q:  How does it feel, as Pepper, to be that strong?

I loved it so much. I was getting kind of like -come on…all these boys are flying around doing all this fun stuff.  I loved, you know, how patient and kind and sweet Pepper is, but, but then I read this script and she is in the suit and flying around.  I loved doing the stunts.  I really had never done anything like that before and it was really fun. I felt like I should’ve been doing this my whole career.  It’s like, why am I doing all these period films?  It’s so boring.

Q: Are we going to see you in more action films?

I don’t know. I would actually really like to, but am I old now to start being in action movies?[LAUGHS]. I would like to.  The nice thing is that everybody has been very sweet about Pepper in this movie.  Everyone says “You have to have your own movie”, because in the comics, Pepper gets her own suit, and she becomes a character called Rescue. Well, I’d better hit the gym.

Q: What color would you choose for your suit?

After all the press in London, we watched it in 3D and I was really surprised. I mean, I thought the movie was actually a really a good movie. I normally don’t watch this kind of movie and I thought it was so good. There were so many really interesting metaphors in it about the media being proponents of fear and how that affects the culture and what’s real, what’s a threat. And I loved Robert as Tony Stark being really stripped back and raw and having to kind of MacGyver his way back to strength. And I loved the relationship with Pepper and Tony. I thought it was really cool to see her wanting to get her needs met. Of course all the action stuff is so fun, but I also think that the bones of it were actually really good.

It’s so fun. He’s really the most spontaneous mad genius – improvising. You’re really on your toes.

We ended the interview by posing for a group picture with Gwyneth. That's me in the back row, just to Gwyneth's right. And the answer is “no”, I'm not really two inches taller than her. She was very concerned about blocking anyone standing in the back row, so she insisted on crouching down. That's another point on the “nice meter” for Gwyneth.

During the interview we also talked about her new best-selling cookbook “It's All Good”.  I'll be back in a few days with more about that!