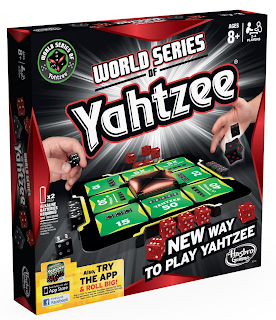 Whenever my family has gotten together for a holiday it has always been a tradition to play board games. When I was younger we always went to my grandparent's house for Easter, Thanksgiving, Christmas, Mother's Day, Father's Day – you name it. In addition to all the other festivities, we always played board games. We would have as many as 20 of us crowded around the kitchen table all playing a game together. While we still have occasional “big” get-togethers with the extended family and play games, it is now usually just my Mom, Sister and I along with our families – but games are still part of the day! 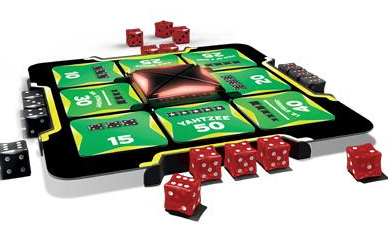 Today we all headed to Mom's house for Easter.  Once we had eaten and were fully stuffed, we played the new World Series of YAHTZEE Game.  Classic Yahtzee had always been one of my Grandma's favorite games so it was fun to reminisce about that as well.  This new game is kind of like a super-charged Yahtzee. Each player gets their own set of 5 dice.  Everyone shakes their dice at the same time trying to match the game combination cards on the board.  The first person who makes a match hits the electronic timer.  The other players then have five seconds to make a match and buzz in.  You then earn the point amounts on the card you match.  The person with the highest score after all the cards have been matched wins the game.

This game is super fun!  It's really fast-paced and it's kind of crazy with 20 dice rolling all at one time.  The timer makes it fun too because it's just like a game show buzzer where each contestant has their own button to buzz in.   We're headed on vacation this week and World Series of YAHTZEE is coming along for the trip! 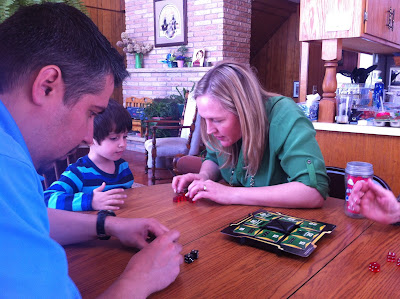 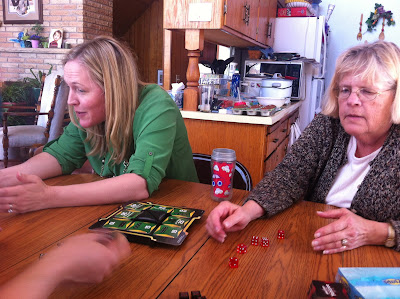 Reader Giveaway:  One lucky Thrifty Jinxy reader will win their own World Series of YAHTZEE Game from Hasbro.  To enter, just complete the entry form below by 11:59 pm ET on  4/14/13.  Good luck!

Disclosure: I received a game to review. Any opinions expressed are my own.