Disclosure:  This trip is courtesy of Disney.  Any opinions expressed above are my own.

Woooooo!!!   I am so crazy, super excited!  I just found out I'll be going to California next month for the red carpet premiere for Disney/Pixar’s BRAVE, to visit Disneyland and Disney’s California Adventure parks for a special tour of the brand new Cars Land….and lots more Disney/Pixar and DreamWorks excitement.  This is what's planned:

Day 1: screening of Disney/Pixar’s BRAVE on the Walt Disney Studios Lot and receive a sneak peak of Tim Burton’s FRANKENWEENIE

Day 2: Screening of DreamWorks Pictures’ PEOPLE LIKE US with a Q&A from Director Alex Kurtzman, BRAVE press day with roundtable interviews with Kelly Macdonald (voice of “Merida”), Kevin McKidd (voice of “Lord MacGuffin”), Director Mark Andrews and Producer Katherine Sarafian. And that night – – the World Premiere of BRAVE!

I think it's going to be a whirlwind trip, but I'm sure I'll also enjoy every minute of it. Stay tuned for lots of posts with updates on the trip and more exciting news from Disney.  You'll find more here as well as on Jinxy Entertainment and on Jinxy Kids. 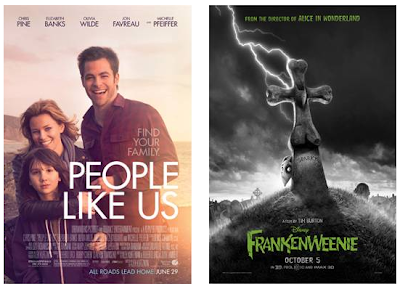