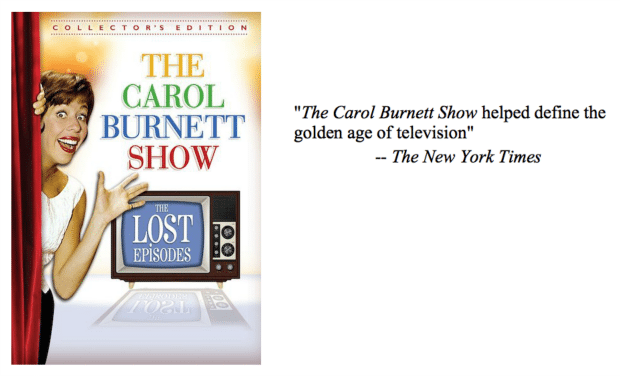 I guess I’m showing my age when I saw that I can still remember episodes of The Carol Burnett Show being on TV when I was a kid. Even when I was little I LOVED it, but now as an adult I can better appreciate how amazingly talented Carol Burnett is and why her variety show was able to last for more than ten years.

Even if you have seen every episode of The Carol Burnett Show, there is now something NEW for you to see. THE CAROL BURNETT SHOW: THE LOST EPISODES is becoming available TODAY, September 15th, a 6-disc collector’s set featuring the best original broadcast episodes from the early seasons of the legendary variety show, hand-picked by Carol herself!

Reader Giveaway:  Three (3) lucky Thrifty Jinxy readers will each win their own THE CAROL BURNETT SHOW: THE LOST EPISODES 6-Disc Collector’s Set. To enter, complete the entry form below by 11:59pm ET on 10/2/15. Good luck!