The air is starting to turn cool and the leaves have started to change.  That can only mean one thing…….Halloween is on its way!  When it comes to this spooky holiday, Jinxy (our black cat and namesake of Thrifty Jinxy) is KING at our house.  He knows that this holiday is all his and he plays the part perfectly.  But as you can see, he doesn't get all worked up over the holiday – he takes being the star of Halloween in stride. (He’s quite modest.)

Or, it could be that he’s just used to it. He has been in on the Halloween game since he was just a young little kitten.  This picture was taken at his first Halloween gig.  He was happy to be an accessory to my witch costume.  I can hardly believe that he was once small enough that I was able to carry him around without running the risk of serious back injury.

Anyway, while Jinxy lays around waiting for October 31st, I'm the one making the preparations.  I was excited when I was asked to check out Kmart Halloween.  Before we know it, Halloween will be here, so we have to do some shopping to start to get ready.  The first thing I found is that at Kmart Halloween they currently have 20% off featured costumes PLUS free shipping! 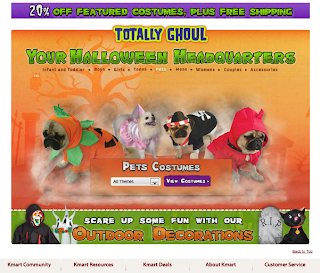 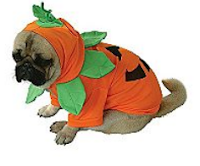 Of course they have lots and lots of costumes for human kids and adults, but they also have pet costumes!  Although Jinxy was a bit miffed that the pictures showed the costumes on dogs, we both know he is one of those rare cats who has the demeanor to put up with wearing a costume.   They did have an adorable little witch costume that would have looked super cute on Jinxy, but since he's such a manly cat I knew he wouldn't go for it and we settled on this Totally Ghoul Pumpkin Pet Costume. (His roly poly body will fill it out nicely.)  After the 20% off and FREE shipping, it came to a total of only $7.99!

Some exciting news is that there is a new Kmart Attack of the 50FT Party web site. Besides shopping, you can find party and costume ideas and posts from bloggers about their Halloween preparations…..as well as a few other things you won't want to miss.

I know a lot of you Thrifty Jinxy readers are sweepstakes lovers, so I can't miss telling you that the Win a Monster Bash Kmart Facebook sweepstakes is up and running!  This week's prize is a $250 Kmart gift card but every week the prize amount increases for a $5000 in prizes overall!

There are more goodies in the “Monster Deals of the Week” section if you're planning to shop in-store at Kmart.  You can find out about savings when you shop online and ship to store and also get more info on Halloween layaway options. They even have a printable coupon to save an extra 5% off Costume Accessories in your local Kmart store. Also find out about deals on treats and supplies for your Halloween parties.

If you would like to see our entire Kmart Halloween shopping experience check out my Intersect Story.  I found some really awesome Halloween decorations that look SOOOO fun!  While you're busy shopping, Jinxy and I will sit back and wait for October 31st!

UPDATE:  Jinxy's costume was delivered!  Isn't he a cutie?