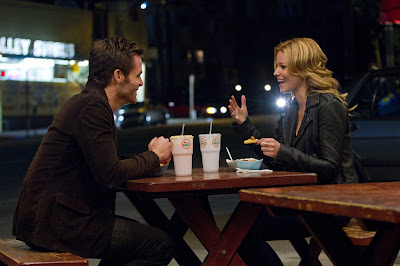 When I posted the interview with “People Like Us” director Alex Kurtzman this morning, I promised I would be back with my reviw of the movie – well here I am!

Let me start by saying that I honestly wasn't very excited to see this movie.  I had seen a couple of commercials for it on TV and read the synopsis ahead of time.  I was actually more excited about loading up on the free candy in the Dreamworks screening room at 9:30 am on a Monday morning.  It didn't take me long to realize that I was actually going to like the movie a lot more than the Butterfinger that had already lodged little pieces in my back molars.

Let me give you the synopsis first:

The film, about family, is inspired by true events. It stars Chris Pine (“Star Trek”) as Sam, a 20-something, fast-talking salesman, whose latest deal collapses on the day he learns that his father has suddenly died. Against his wishes, Sam is called home, where he must put his father's estate in order and reconnect with his estranged family. While fulfilling his father's last wishes, Sam's world is turned upside down when he uncovers a startling secret – – He has a 30-year-old sister, Frankie, whom he never knew about (Elizabeth Banks). As their relationship develops, Sam is forced to rethink everything he thought he knew about this family—and re-examine his own life choices in the process. Michelle Pfeiffer and Olivia Wilde co-star. 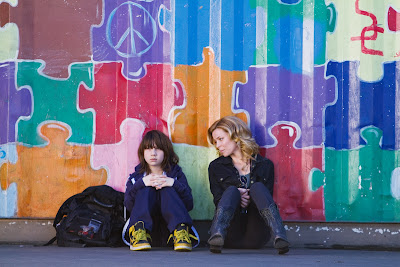 There is a lot to love about this movie.  First of all the cast is fantastic.  Chris Pine shows a great range and Michael Hall D'Addario plays a much more realistic distressed 11-year-old than seen in most movies. But I think it is the women who really shine in this film. I was so depressed to hear that Michelle Pfeiffer would be playing Chris Pine's mother, more or less making her the “old lady” and making me feel only a step or two behind her. But she is fantastic in this role and looks beautiful despite her age and despite the efforts to make her perhaps look a bit older than she even is.

The brightest star of the bunch is definitely Elizabeth Banks. (Off topic, but I have to say that in her wearing of a leather biker jacket throughout the movie she reminds me so much of a younger Michelle Pfeiffer in Dangerous Minds.) She plays a smart, funny and sexy Frankie. She is a fighter who makes her own way for herself and her son. Her character only briefly lets her fragile interior peek through the cracks of her tough outer shell.  We might see her name showing up when Oscar season rolls around. 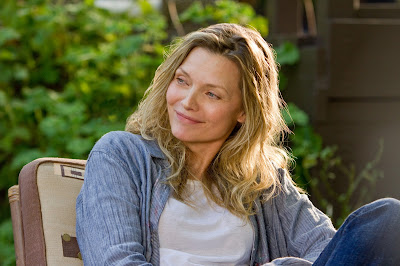 Besides the human characters of the movie, music and the city of Los Angeles also play important roles.  Even though I had only spent about 24 hours in LA before seeing the movie, I already recognized the shot of the freeway sign for the Highland/Hollywood  exit ramp near the beginning of the movie as being right where we were staying during our visit.

While “People Like Us” has plenty of humor throughout the film, it is very moving.  It touches on the bonds of family and the unforeseen consequences of our decisions.  Yes, I was bawling by the end of the movie even though I was trying to reign myself in and maintain some composure.  The true sign of how powerful the film was came as the credits were rolling and our group of bloggers began to file into the ladies room.  Where the same room had been bubbly and full of chatter before the film, it had now become silent.  It's the kind of movie where you want a few minutes (or possibly much longer) to collect your thoughts and think about what you just saw.