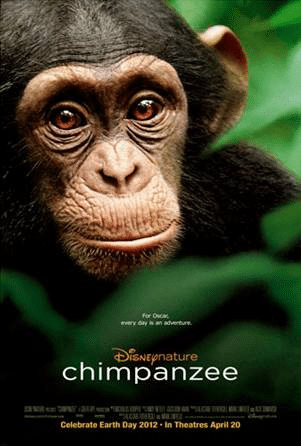 Disneynature's CHIMPANZEE hits theaters everywhere today, April 20th.  I had the opportunity to see the film earlier this week.  If I had to choose just ONE word to describe it, I would have to go with adorable, but then I would feel bad about leaving out fascinating, beautiful, touching, and amazing.

I'm sure that most of you have already heard the buzz around Chimpanzee and/or seen the TV commercials, but if not, it's the story of a young chimp, Oscar, beginning his life in the African rain forest.  He must learn important skills for survival including finding food and a safe place to sleep, as well as staying safe from a rival band of chimps.

For a little preview, you can check out the “Making of” featurette below.

Being the nature geek that I am, my favorite part of the film was seeing the fascinating day to day actions of the chimps, but if you're a fan of drama there is plenty of that and if you just want to look at cute little chimpanzees you won't be disappointed either.

I encourage you to see the film during it's first week.  For everyone who sees Disneynature CHIMPANZEE during opening week (April 20-April 26, 2012), Disneynature will contribute $.20 per ticket to the Jane Goodall Institute for the Disneynature Tchimpounga Nature Reserve Project with a minimum of $100,000 pledged to this program.

The cinematography of the movie is amazing.  During one scene I actually leaned over to Mario and asked “How did they get that shot?”  When you go to see CHIMPANZEE yourself, be sure to stay until the end of the film to get some insight from the filmmakers about what they went through to capture this incredible story on film.

For more on Disneynature's CHIMPANZEE, see our related posts: