While in Los Angeles last week, I not only got to see a screening of People Like Us, I also had the opportunity to participate in a group interview with its director, Alex Kurtzman.  It’s a good thing that the interview session was recorded because I was still trying to collect myself after being so moved by the movie and didn’t do such a great job of taking notes.  Stay tuned for my review tomorrow, but in the meantime, on with the interview! 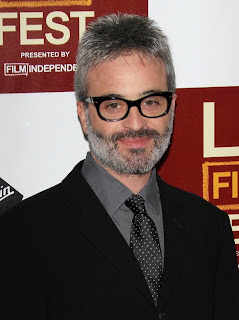 Tell us where the story came from.
I met my sister when I turned 30.  My dad had had another family before ours.  We knew about them growing up, but I’d never met them.  My wife and I were starting to think about having kids and it makes you think about your family and where you come from.  I started thinking about my half-sister and half-brother and wondering who they were and what they were like. And — and this image came to me.The image was the last image of the movie. And I didn’t know who those characters were in the image. But it just struck me very profoundly as the ending.   I thought, “Wow, that — that seems like a really interesting story.”

I didn’t think much of it, but I went to a party that night and a woman walked up to me and said, “I’m your sister.” So that — that’s begun the seven years of the odd odyssey of trying to work through it and separate truth from fiction in order to make a movie.  What you see is I think in many ways very autobiographical and in other ways there’s a lot of invention in there. But I certainly think there’s a lot of emotional truth for a lot of people in my family in there.

Did your sister see the film yet and what did she think about it?

Yeah.  She was very proud.

Did you pitch your idea to Dreamworks?

No. I didn’t pitch it at all.  I felt very compelled to write it and I knew that it was not going to be something I could sell on a pitch nor did I want to. Because the truth is that I honestly never really thought this movie would happen. Uh, it was just something I had to write. So between the “Star Treks” of the world this was like the safety blanket that I kept going back to.  And, you know, Sam and Frankie became like my best friends.  They became like these people who I loved so much and all of them became so real for me. I think that early on the process we had written a draft and it was terrible. Our first draft was really bad.  I think it was because I had gone so far away from the truth of my own life that it didn’t ring true and I just felt like everything was contrived.  I took about eight months to sift through that and think about what I wanted to keep and what story I wanted to tell.  Then I started rebuilding the script.

It was weird because I heard Frankie in draft one and she never changed for me — I heard her voice. I knew who she was, but I could not hear Sam. And it took seven years to hear Sam. I kept trying to plug in different jobs to Sam. And it’s funny because one of the lessons that the script taught me is that what your character does for a living is one of the most important choices you can make as a writer. Because whether it’s about that job or not, it tells you everything about the condition of that character’s life. Are they doing what they love or are they doing what they hate?  I kept trying to put all these careers on Sam.  First he had inherited his dad’s — so embarrassing to say — his dad’s fish market.  And then he was an audio engineer. And then he was a club promoter. And everything was bad.  One day I was sitting with my friend and he told me that he was in the barter business before he became a writer.  I said, “What’s the barter business?” and he started talking to me about it. And it was like a light bulb went off.  Suddenly I understood this is  it.  I mean not only was it sort of the perfect metaphor, a character who grows up in a house of lies, but  what would they end up growing up to do?  They would grow up to sell lies for a living. That’s what they would know how to do. So I love the idea of what happens when that guy is presented with this really tough moral choice that could either be his redemption or his ultimate downfall.  It took seven years to even get that right and when I got it and I felt it was right, I gave it to everybody at Dreamworks.  I said, “You guys don’t have to like this and you certainly don’t have to make it. I just wan to know what you think of it.”  I gave it to them on a Thursday and I got a call on Saturday. And they said, “We’re making a movie.” 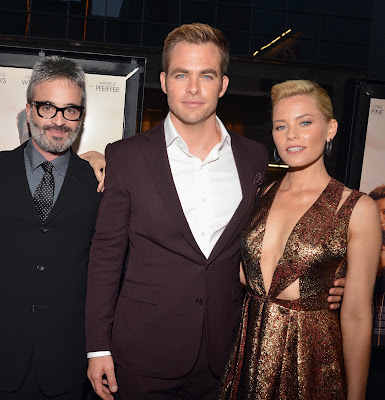 Did you know who you wanted to play those roles?

No, not really. B ecause it took eight years to write the script, a lot of actors go through your life in eight years and the person who’s right at the beginning isn’t necessarily right at the end. There was also a question to me about how old I wanted Sam to be at certain points because he makes choices that are so incorrect.  There’s a part of me that felt like maybe he should be younger. And then there was a part of me that thought, “No, really, it’s about a guy who is sort of in a real delayed state of adolescence.” And he’s actually 30 and he can’t quite grown to that place yet.

But Chris was the first person that I asked, having worked with him on “Trek” and having seen him, uh, in theater.  He’s incredible.  He has done amazing stage work and I just felt like the thing about Chris for me is that he’s first of all he’s a guy. And I really needed Sam to be a guy. And he’s a man, but when you look at him in here he’s ten years old. And every time I saw him on the monitors I saw this boy. And what I thought was so beautiful about that is that the only way to forgive this character is to understand that he’s really still a child in a lot of ways. That he’s trying so hard to be a good person. He just doesn’t really know what that means at the beginning of the movie.  I loved the idea that when the movie starts he’s this guy who’s literally selling air.  And when the movie ends he’s the guy who’s just utterly vulnerable standing there on his sister’s doorstep saying “this is who I am. I don’t know how to be better, but I wan to try.”  That required a lot of range.

I saw a lot of actresses for Frankie and they were all amazing, every one of them. But my worry with Frankie was that she would walk into the room and there would be a heaviness about her given her life. When Elizabeth came in, she did the A.A. monologue and the Laundromat monologue and she kind of threw it away.  I felt like I was watching was this person who was trying very hard not to have the words mean what they meant and because of that they meant so much more because she wasn’t living in the drama of it. She was sort of trying to play it off. And the more she tried, the less capable she was of playing it off. So that by the time you get to the end of those monologues you realize how raw and real she is – how her armor is coming down. And right when her armor is coming down she’s letting Sam in.  And she’s also just a brilliant comedian.  She can spin any line a thousand different ways. She’s unbelievably smart. They both are just so smart.  There’s a sharpness about her that I think is conveyed in Frankie’s character because I knew that Frankie had to be like “you do not mess with Frankie”  but when she did make herself vulnerable, you needed to recognize that it was such an experience and a rare moment for her because she just didn’t do that.  Elizabeth conveyed all of that to me in about two seconds when she started reading.

How many kids did you look at for the part of Josh?

Over 500.   It’s very difficult to cast children, particularly because of the part of the angry young kid could be such a cliché and it could be so precious.  The thing with kids is that they’re often coached by their parents and what they come in to the room with is what their parents have been grinding into their heads the night before.  So what you’re really doing is trying to undo all the stuff that the parents did the night before to get to what’s real in that kid.

Michael is actually a phenomenally talented musician and much more interested in his musical career than acting, which makes him a great actor because he’s totally unselfconscious.  He’s not trying to impress anybody. So that boy that you see on screen is very much Michael.  He’s a sweet, sweet guy and very easy to direct, which is absolutely not the case with kids a lot of the time.  But I also felt that there was a big margin of error if that kid didn’t work in this movie.  It could have been a disaster!  When you think about the child performances like Justin Henry in “Kramer vs. Kramer” or Henry Thomas in “E.T.”. and there was something so real about those kids and raw about them.  I felt like the only way this was going to work was if  I had a kid who did that.  So what was scary was the waiting because there were some kids who came before and you’re like, “Maybe we should just go with that kid.” And as you’re getting closer to production and closer to production and the clock is ticking you’re like, “Oh my God, am I gonna find somebody?”  Then at the 11th hour Michael walked in the door.